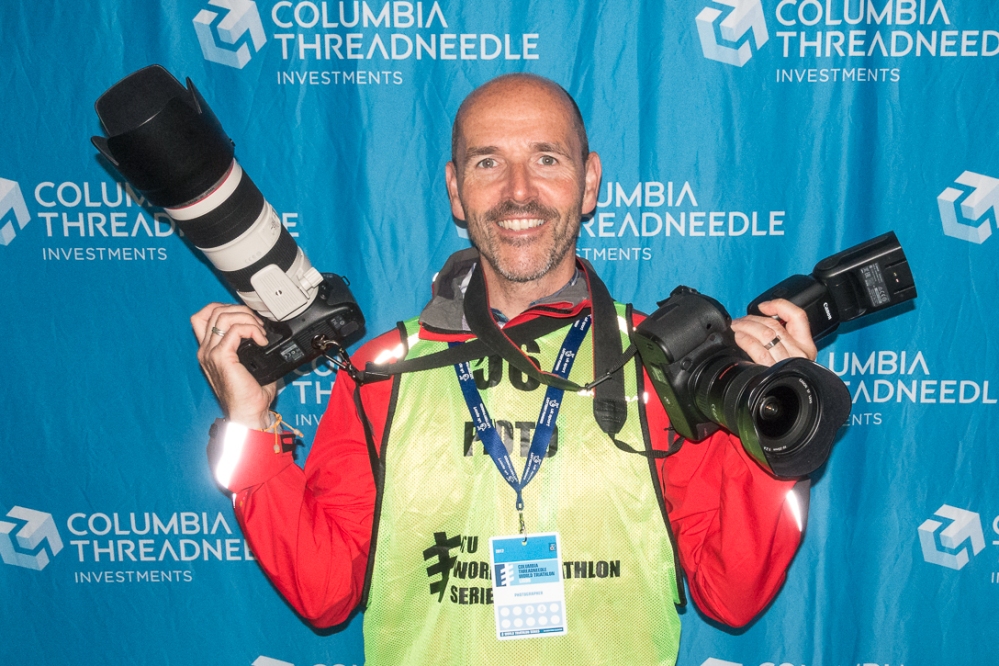 Ready for action! I have my cameras, accreditation, press, photographers pass and photographers bib. Now all I have to do is find some athletes to photograph!

I was recently up in Leeds taking pictures of the incredible triathletes at the Columbia Threadneedle World Triathlon, Leeds.

The conditions were perfect. Warm, slightly overcast and a lovely moderate breeze to keep cool with. Well, I thought the conditions were perfect for me anyway for taking pictures. Whether it was ideal for all the competitors I’m not sure! Although not competing I did a fair bit of running around myself to various locations in and around the triathlon course from the grandstand and the second transition to the swimming course and the first transition up at Roundhay, a few miles outside of the city. It was all go go go for most of the day.

A few images from an amazing day taken at the Columbia Threadneedle World Triathlon, Leeds.

I managed to get myself into some great vantage points to capture all the action on the day. It was lovely to watch both the male and female elite competitors do their warm up dives and I managed to grab quite a few shots of them springing from the pontoon into the water before gathering together for the start.

One of the female Elite competitors warming up with a practice dive.

Focus. One of the female Elite competitors gets some last minute coaching advice.

The swim was pretty spectacular to watch. Once all the competitors had leapt from the pontoon piercing the tranquil waters directly in front of them, the calmness was shattered! There was a mass of bubbling frenzied white water that appeared a couple of feet in front of the swimmers like a mini tsunami. All you could see was the hundreds of flailing arms and lime green swim caps appearing out the boiling water.

Under starters orders and it’s almost time for the off.

It didn’t take a long time for them to find their natural pace and fall into pecking order. After the first lap they had to exit out the water by swimming up to a large ramp, scramle up and out the water to the top of a gentle incline before hanging a left turn for a further few meters before launching themselves off the pontoon and back into the water for the final lap.

I managed to get some great shots of individuals and of the whole group, before, during and after the swim start. As soon as at least half of the competitors had started on their second lap I legged it to the first transition where the bikes were all lined up awaiting their riders and where I would be positioned ready to take their pictures.

Again I managed to get into a prime spot ready to capture the action of the competitors running up the long slipway to their bikes.

I had two cameras around my shoulders readied for action. I started with the 70-200mm telephoto lens fitted to the Canon 7D and fired off an initial burst of shots as the competitors closed in on their bikes. As soon as they were close enough I switched to the Canon 5D and the 16-35mm wide angle lens. Finally switching back to the 70-200mm telephoto lens to capture the pack leaving the transition area and heading out and up the step hill onto the cycle route. 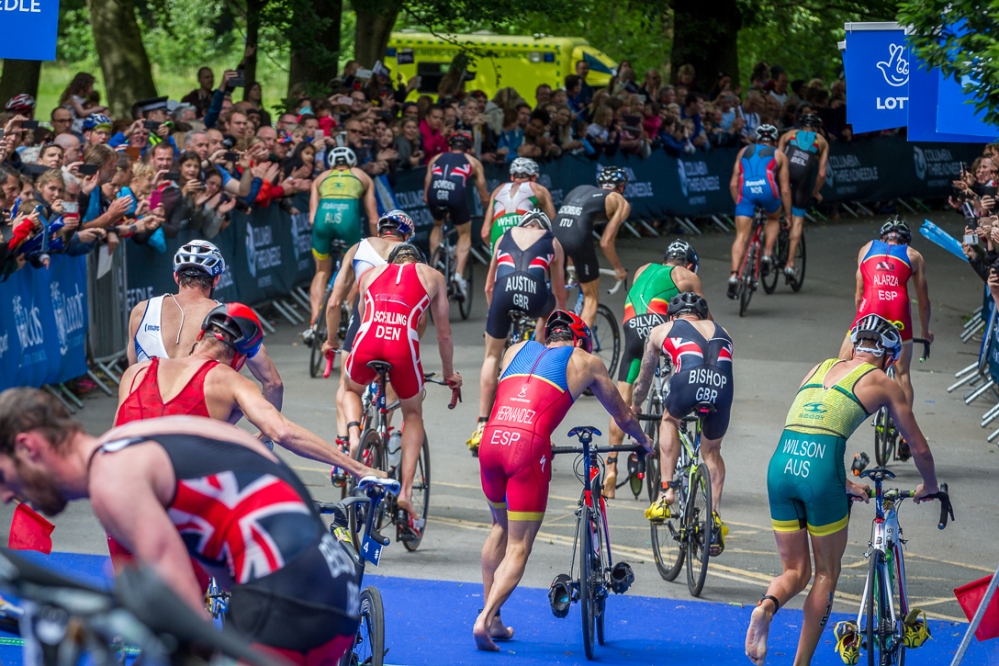 The Elite men just out the water and onto the bikes immediately face the steep hill at the start.

Ooh, it was very exciting to be so close to the action and having to be super quick at swapping cameras, changing apertures, shutter speed, focal distances and zooms, all within a matter of seconds. There was going to be no second chances to retake the pictures or get a better vantage spot. As it turned out, I think I bagged a pretty good window to take the action shots for both the elite male and female competitors.

The main cycle pack trying to close the gap between them and the Brownlee brothers. 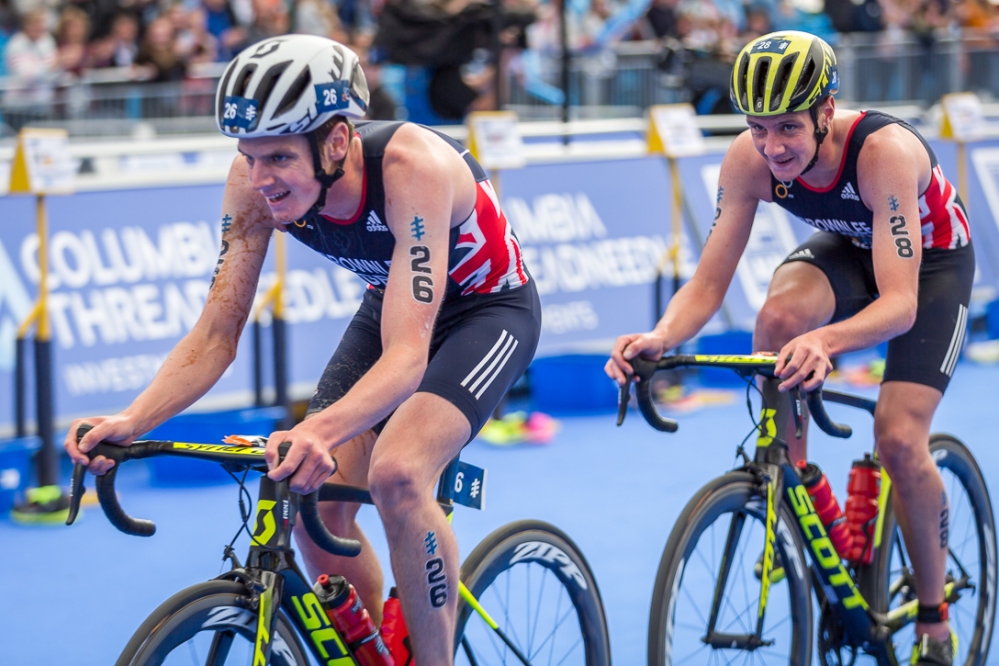 The Brownlee brothers doing what they do best – being in front!

Because we were a fair distance out from the finish line in the city, literally as soon as the last competitor had left the transition area, all the photographers quick marched up to the media bus to be shuttled back to the city centre which was about a 20 minute drive. This gave us an other wise impossible opportunity to get to the second transition and the finish line in time to take pictures. 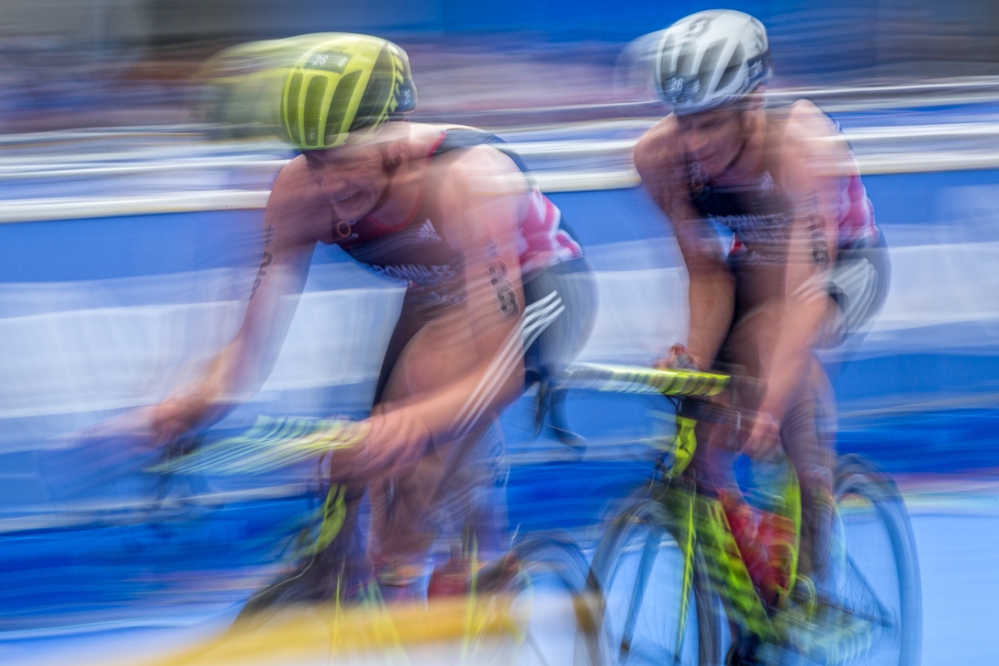 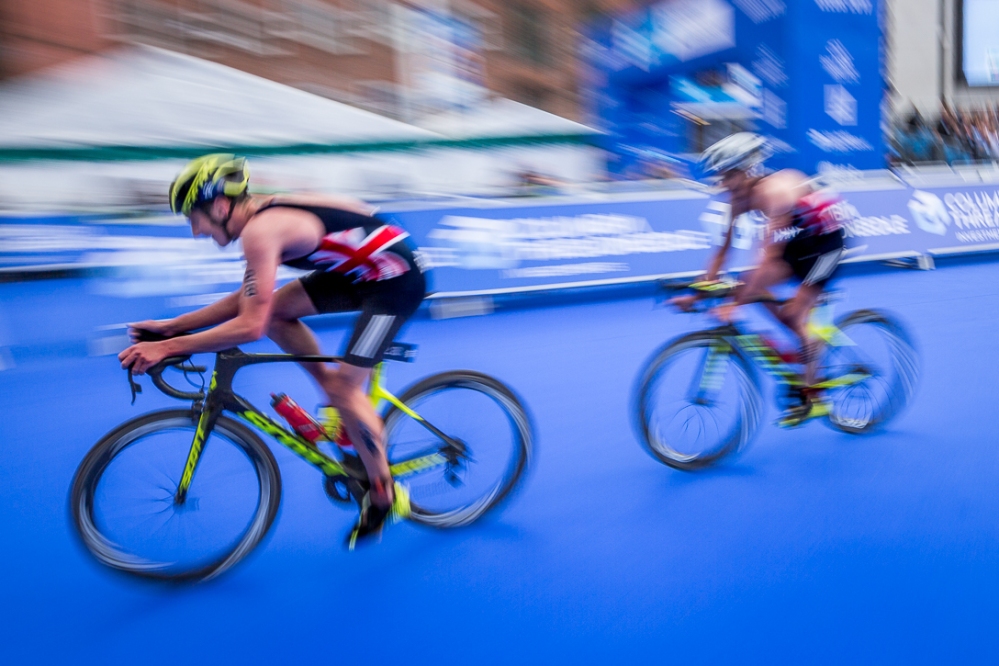 The fabulous Brownlee brothers in action.

I grabbed a spot right by the top exit of the second transition area and only a few meters from the finish line. It gave me a perfect angle to take pictures of the athletes coming into transition and then exiting. Because competitors had to do a number of laps both on a bike and running I had a lot of opportunities to get the perfect shot and be a bit more creative and experimental in my image creation. If a technique didn’t work out on one lap I could always make up for it on the next. So I tried a number of styles from freezing the action with a high shutter speed to capturing motion blur with a slow shutter speed and small aperture and just about everything in-between. Some turned out really well and I was happy with the result while others were either too blurry, too much in focus or not enough in focus. It was an amazing opportunity to experience these incredible athletes at close range as they sped passed heading to the finish line.

After the mens final I packed up my gear and got an early evening train back home. As soon as I was through the door I started to recharge the camera batteries and download all the pictures I took during the day in readiness for the first pass and cull of the image shortlisting process.

They’re off the bikes and into the final part of the race. 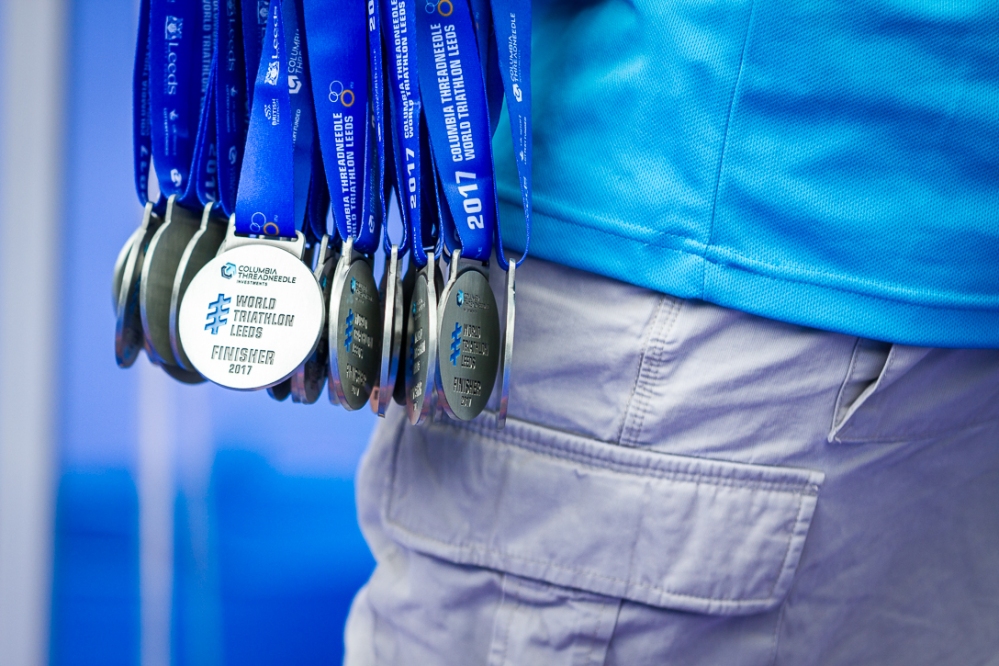 The amteures who took part and finished the triathlon all received one of these well deserved medals.

A packet photographers gallery. Everyone is posied with fingers on the trigger to take the winning picture of the Elite Men’s final.

What’s in the bag? 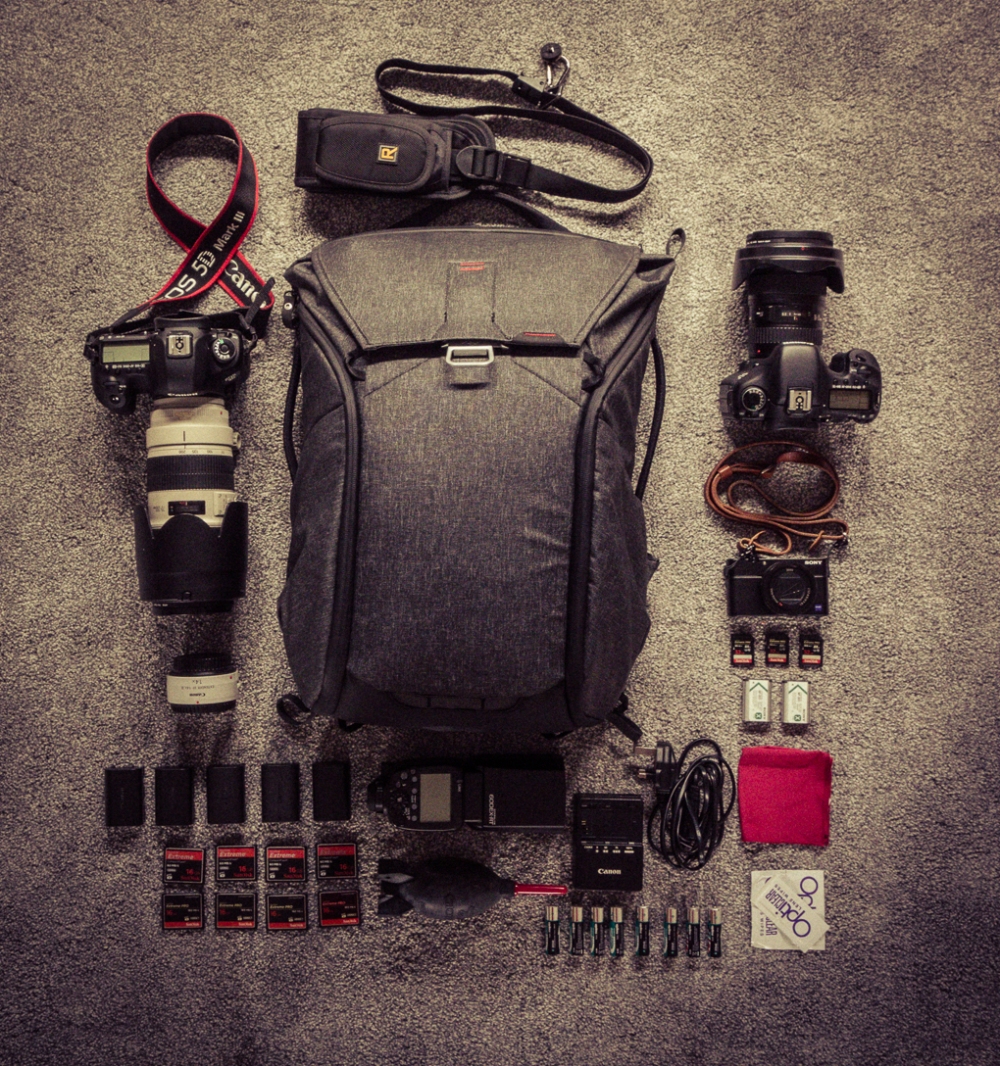 Quite a lot really. Below his a list of the equipment I took with me on the day to help me capture all the action.

Some rough stats from the day

4350 Hi-Res RAW images taken
Importing Hi-res RAW images 7 hours
1st pass cull –1787 deleted and takes about 2 hours
A week later I have it down to under 500 of which I’m pretty happy with around 20!

This is a text widget, which allows you to add text or HTML to your sidebar. You can use them to display text, links, images, HTML, or a combination of these. Edit them in the Widget section of the Customizer.
Loading Comments...
%d bloggers like this: